Andrew Schleiss’ life was positively impacted by Goodwill Industries of North Central Wisconsin (NCW) even before he was hired.

In 2012 and 2013, Andrew’s oldest son, Matt, participated in Goodwill NCW’s School-to-Work program during his junior and senior years of high school. The program gave Matt an opportunity to overcome his barriers to finding employment and practice essential work skills like clocking in-and-out and showing up on time. Matt also began participating in Miracle League of the Fox Valley, a Goodwill NCW program that offers children with disabilities the opportunity to play baseball in an organized league on an accessible field, helping them build social skills and confidence.

Prior to his son’s experiences, Andrew thought of Goodwill as a good place to donate and get a great deal. After Goodwill NCW programs helped Matt, Andrew understood why Goodwill NCW exists. “Goodwill created a work environment that set my son on the path to meet his full potential,” Andrew said.

The skills Matt gained at Goodwill NCW prepared him for his next step: A fulfilling job with a local employer. A few months into his hire, he no longer needed a job coach and was able to work independently, which was a huge accomplishment. “We are so proud that in 2022, Matt celebrated his seventh anniversary of employment,” Andrew said.

In May 2018, Andrew left the for-profit retail world and joined Goodwill NCW as a team member. Mission is what drew Andrew to apply, and mission is what keeps him coming back every day. He has held several roles, elevating each time into broader responsibilities. Andrew now supports multiple Goodwill NCW stores across the state as a Regional Team Leader.

His journey at Goodwill NCW has meant better mental health and more time for family priorities. In Andrew’s words, he has his dream job. Jill Henselin, Director of Retail Stores, has been a mentor and guide to Andrew at Goodwill NCW since he began. “The thing that’s been really exciting about Andrew is that he brings his personal story into our world. He really has brought our mission to life by sharing his story,” Jill said.

Andrew’s passion for the mission is evident. “At Goodwill, what we do matters so much. You can see that in the statistics, but you can also see it in the faces we work with every day,” Andrew said. “Here, I have tangible proof that I have impact beyond what I ever thought possible. Putting people in a position where they can do their best—just like Goodwill did for my son—there is nothing like it.” 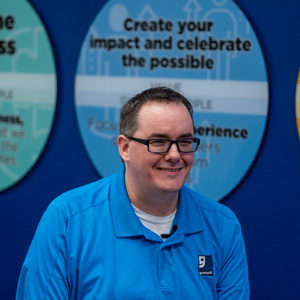